Kashgar is one of the pre-eminent and most important staging posts along the silk road, located as it is at the foot of the Pamir Mountains where the routes around the desert to the east converge and meet with the routes over the mountain passes to the west, to the Indian sub-continent, Afghanistan, Persia, the magnificent cities of the Fergana Valley, and beyond to the Middle East, Turkey and Europe.

Kashgar has existed in its role in the entrepôt trade for over 2000 years and in that time has been ruled by most of the adjacent tribal groups -- Chinese, Persians, Tajik and Turkic tribes based in Bukhara and Samarkand -- and for many years was also the capital of it's own fiefdom, Kashgaria, at various points from the 16th through to the 19th centuries. Toward the end of the 19th century it was a major location for the theatre of 'The Great Game' between Britain and Russia, both of whom maintained representatives in Kashgar.

In 1930 a pan-Islamic Turkic group based in Kashmir declared the Independent Republic of Eastern Turkestan, with its capital in Kashgar (which informally had existed for some time, and is shown on maps from the end of the 19th century onwards) -- but in 1933 the Chinese, aided by the Russians, re-took control. Since then the central Chinese government has fostered a policy of encouraging the immigration of ethic Han Chinese into the broader region (including Urumqi) to try and shift the majority balance of the population from the local ethnic Ughur and Tajik peoples.

There are a variety of markets in Kashgar which have changed little in substance over the decades -- two pf the most interesting are the night market, similar to markets throughout the Middle East and Asia serving immediate food for dinner (the lamb kebabs are great!!). The daily fruit and vegetable market fills the narrow streets of the old town with heaps of local produce which the townsfolk carefully sort and select.
Back
Recent Work > Silk Road > Kashgar Markets 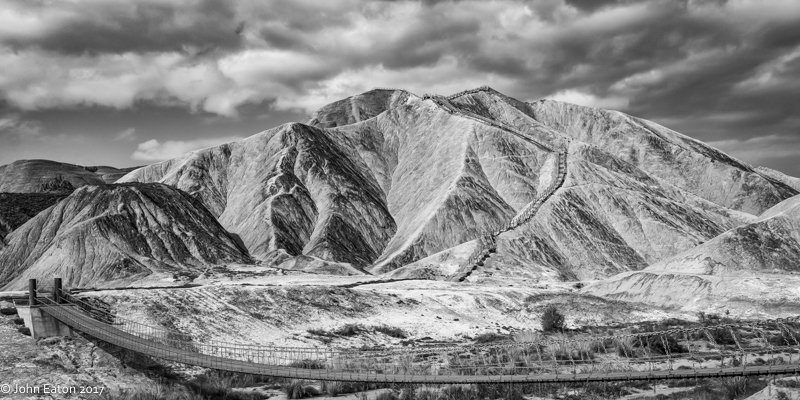