The Al Hajar mountains in the interior of Oman are a geologist's paradise and provide magnificent, rugged landscapes. Running for almost 200 miles north-west to south-east, immediately to the north of the Wahiba Sands and between the sands and the coast, they contain the highest mountain in the Arabian peninsular, Jabal Shams at almost 10,000 feet.

The summit of Jabal Shams itself is occupied by radar and communications installations, but one can drive (on a dirt-road!) to a magnificent overlook just south of this – driving up anywhere in the mountains in the summer provides a blessed relief from the baking temperatures in the desert below! Beneath the overlook lies the breathtaking Grand Canyon of Oman, a series of jagged valleys and rugged escarpments disappearing into the distance whose sheer walls drop 3000+ feet to Wadi a'Nahkar below.

The Wadi a’Nakhar emerges from the mountains near Al Hamra, north of Nizwa, from where it is possible to drive back into the mountains on a rough rocky track that follows the bed of the wadi. The wadi narrows fairly quickly beyond the entrance and in some places the track is no wider than the wadi bed, hemmed in by 1,000 foot cliffs on each side – obviously, you don’t drive this after heavy rain! The scenery is spectacular and the drivable track ends after about 6 miles at a small hamlet with a few houses, a date-palm oasis and (usually) local people selling rugs and other woven products. From here it is possible to hike the rest of the way up into the Grand Canyon and to Jabal Shams.

Further to the south-east a paved road from Al Hamra climbs in a long series of switch-backs to Sharafat al Alamayn, considered to be the finest panorama in Oman, across the western Hajar mountains all the way to the coast. This is the start of the spectacular descent of the Western Hajar through Wadi Bani Auf, generally reckoned to be the most memorable off-road drive in Oman (and the entire Arabian peninsular) -- a rough, narrow dirt track descends (very!) steeply down the escarpment, with sheer 1,000 foot drop-offs on one side, in a series of tight hair-pins – it’s a challenge to the skills of experienced off-road drivers and is pretty much impassable during and immediately after any wet weather.

Further to the east lie the amazing terraces of Aj Jabal Al Alkdhar, famous for growing fragrant roses whose petals are harvested for fragrances, with the villages of Ashraijah and Al Ain perched on the edge of the Saiq plateau overlooking them. The plateau is around 6,000 feet above the plain at Nizwa and consequently gets around 12 inches of rain per year – this, together with very careful water management and terracing of the steep hillside, enables the growth of pomegranate, apricot, peach and walnut, as well as the roses for which it is famous
Back
Archive > Oman, the UAE, and Kuwait > Wadi, Mountains & Terraces 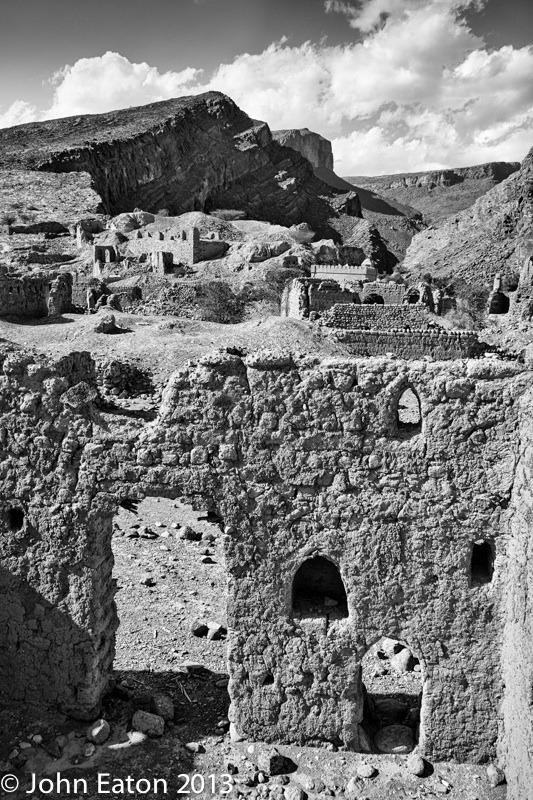