Since the accession of Sultan Qaboos in 1970, Oman has undergone a transformation, especially in the interior of the country. One manifestation of this development is the building of new, higher-quality homes for the population with modern amenities and facilities, as well as communal facilities such as schools, hospitals and shops, and significant improvements in the transport, communication and utility infrastructure. In the interior of the country this new building often occurred on new, more accessible and more easily developed sites away from the historical locations, which had been chosen more for defensive capabilities.

A result is that in some areas houses and, in some cases, entire villages were abandoned as their inhabitants moved to new homes, leaving behind many fine mud-brick buildings that have slowly deteriorated and today are derelict. Today these buildings and villages may be totally or only partially abandoned, yet the remains of the houses still show much of the fine carvings and moldings around the doors and windows with which they were originally decorated and fine examples of this work can be seen in the villages of Al Minzifah and Al Mudhuraib, amongst others.

Historically many of these abandoned villages were built in strong, defensible positions (typically against a mountain), yet adjacent to the irrigation systems and date-palm plantations that provided livelihood for their inhabitants. In several instances the old villages still exist in their defensive position against a mountain, today largely abandoned, while a new community has been built and grown up nearby on the plain -- a classic example is the village of Birkat Almouz.
Back
Archive > Oman, the UAE, and Kuwait > Old Villages & Houses 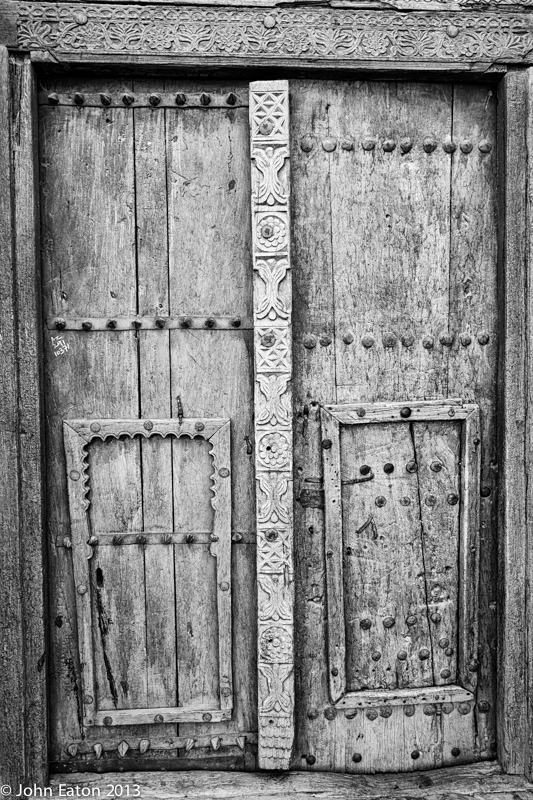